Running of the Bulls Brings Excitement to New Orleans this July

July 2, 2019
by valentinohotels
in
Prince Conti Hotel Running of the Bulls 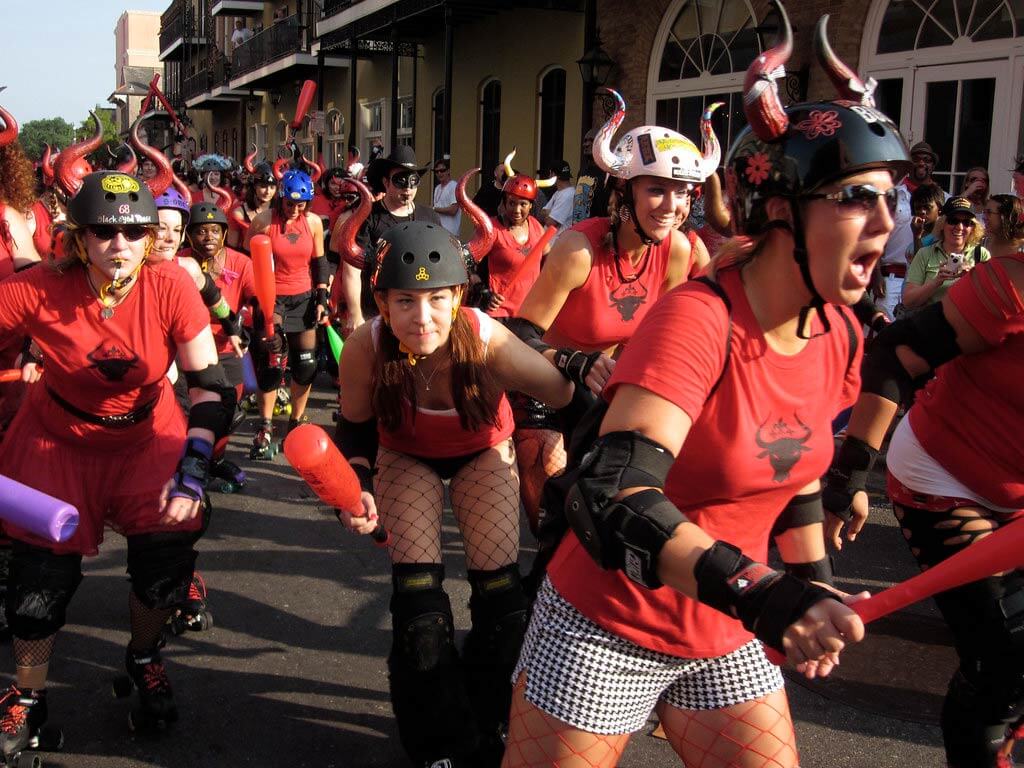 Photo: Some rights reserved by Infrogmation

You haven’t seen it all until you’ve witnessed New Orleans’ eccentric version of Running of the Bulls. This wild festival, known as San Fermin in Nueva Orleans, is fashioned after the traditional event that takes place in Pamplona, Spain, each year. But instead of the wild beasts running in the streets goring people, the Big Easy Rollergirls dress up like bulls and skate after runners, attempting to whack them with wiffle ball bats. This fest is sure to get your blood pumping!

The runners are encouraged to wear all white with red accents like sashes and kerchiefs (following the style of the traditional Spanish festival). The bulls sport black and red, and the horned helmets. Both the runners and the bulls are known to get creative with their costuming, so you’ll have the chance to see some pretty eccentric creations out there.

This year, the festival will be held over the weekend of July 12-14. The Encierro (the run) itself is always held on Saturday, and the partying starts early. Around 6:30 a.m. people will start gathering around the Sugar Mill (1021 Convention Center Blvd.) in the Central Business District in downtown New Orleans, enjoying live music, food trucks, and sangria. After the procession and the invocation honoring San Fermin, patron saint of Pamplona, the run begins at 8 a.m., making its way through the CBD and Warehouse District on a near mile-long route.

Although you will get some exercise while running from the Derby Girls, Running of the Bulls is just as much about the food and drinks as it is about the “running.” Many participants stick around after the run is done, at approximately 11:30 a.m., to continue with the bar-crawling in the area. Another option is to attend a live music show back at the Sugar Mill (the route begins and ends there). After that, you can also check out the after-party, La Fiesta de Pantalones, held this year at the Rusty Nail (1100 Constance St.) starting at 11:30 a.m.

The festival’s opening party on Friday is an annual ticketed fundraiser with an open bar, an auction, and delicious food provided by Commander’s Palace, SoBou, Tavolino, and Atchafalaya. The closing party on Sunday, called El Pobre de Mi (“Poor Me”), will wrap things up at Lula Restaurant Distillery (1532 St. Charles Ave.), 10 a.m. – 2 p.m. This will be your chance to recover from the run with burlesque, cocktails, and a Papa Hemingway look-alike contest (yes, the party is Ernest Hemingway-themed).

The events happening on Friday and Saturday are ticketed (tickets are $30-$95), while the Sunday closing party is pay-as-you-go. Proceeds go to Beth’s Friends Forever, a charity named after Nola Bulls cofounder Beth Hanning, which raises money for local women fighting cancer; and the Big Easy Animal Rescue.

Come run with the bulls this summer at San Fermin in Nueva Orleans, and stay at the historic New Orleans hotel close by, the Prince Conti Hotel. Conveniently located in the French Quarter, the Prince Conti Hotel has all of the new amenities and conveniences you want, without sacrificing any of the old-world charm.